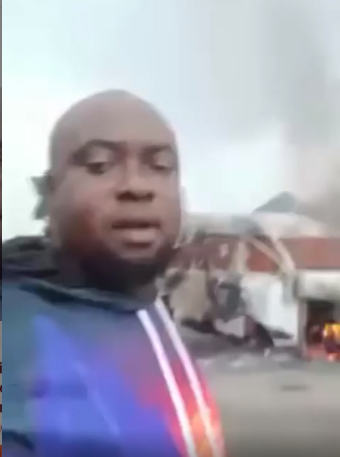 A Nigerian man has narrated how IPOB’s ESN members allegedly attacked him and others, and reportedly killed three people.

According to the man who identified himself as Jeff, members of the secessionist group’s militant arm, allegedly vandalized his car but spared his life and that of his family during the encounter at Aboh-Mbaise, Imo state.

He also alleged that a passenger bus which tried escaping was shot at before being set ablaze with its occupants. He also captured other cars which were set on fire by the men.

This is coming after the group threatened to effect a lockdown in all South-East states until their leader, Nnamdi Kanu is released.

You have reached your limit of 5000 friends!

File size error: The file exceeds allowed the limit (92 MB) and can not be uploaded.

Your video is being processed, We’ll let you know when it's ready to view.

Unable to upload a file: This file type is not supported.

We have detected some adult content on the image you uploaded, therefore we have declined your upload process.

To upload images, videos, and audio files, you have to upgrade to pro member. Upgrade To Pro